Back to Brazil, and new hackathons... 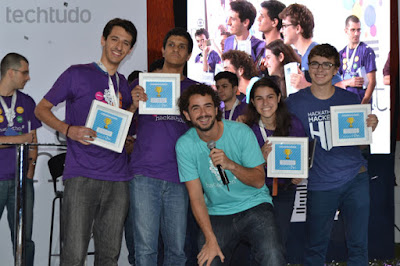 I came back to Brazil three months ago, and after my return I started working as an iOS developer in a new start-up company called Bike da Firma, but me coming back to Brazil is not interesting enough for me to write a blog post about it... What is really interesting is my participation in two other hackathons.


One of them wasn't really a hackathon, it was more like a project submission. The main goal of Sao Paulo Interativa was to create an application that used open data from the city of Sao Paulo and that could provide something useful for its citizens. For this "hackathon", Giovanni Marques and I created a project called Social hotSPot which is a location-based social network. This app uses the network of public wifi hotspots of the city as means of detecting the user location (even indoors), and it allows the user to post messages on a "virtual wall" for that location. Other users at that same location would be able to interact and reply to those messages. This app can also bring some useful information about the place itself, like historical information or current news (it could also show some ads related to that place or the neighbourhood around it, but we haven't implemented it). Unfortunately the project wasn't selected as the winner, but it was between the twelve best projects submitted on that competition.


Now this was a real hackathon! Last weekend I traveled to Rio de Janeiro to compete on the first hackathon of Globo, which is the biggest television network of Latin America, inside the house (or should I say studio?) of the Brazilian Big Brother programme.

The main goal of this hackathon was to build something that could "change the way people produce and consume content" for television. It proved to be quite a challenge, especially now that less and less people are watching television. However, we've had great people participating, and with all the equipment you could think of available for us (Arduino, Raspberry Pi, Leap Motion, Oculus Rift, Nao, Kinect, RealSense, MYO, GoPros, Google Glass, Google Cardboard, 3D printers, etc), sky was the limit.


We had great equipment... 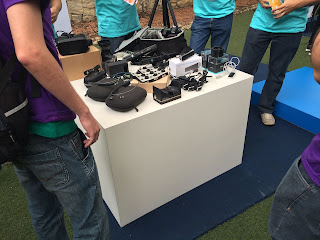 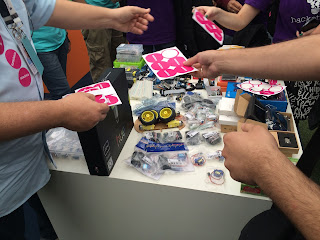 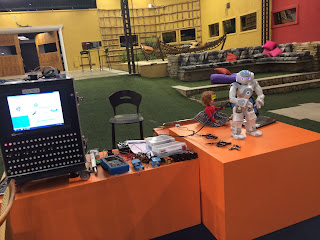 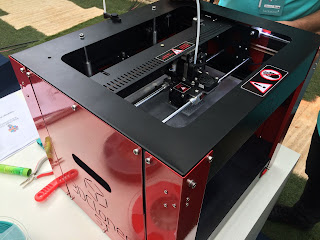 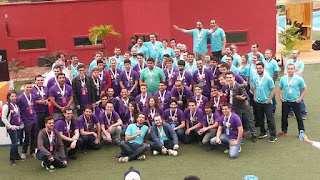 Needless to say, being inside a television studio, we were surrounded by cameras and reporters all the time, and that proved to be another challenge when we had to focus on development. They were even broadcasting the event online. Luckily, we had a swimming pool available for us, which proved to be the best place to write code and relax. 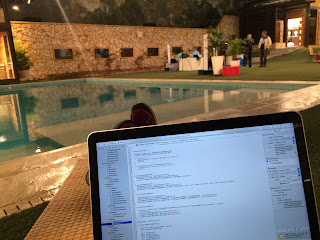 One could write OpenGL code smoothly with that cool breeze... 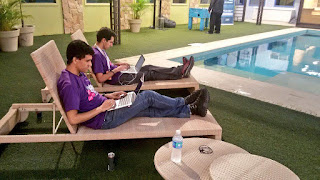 Believe me, we were really focused.

So, you must be asking now: and what was the project? Well, first we had to create our teams and pick our ideas during the first two hours of the event. My idea was to create something that used that popular "smartphone hologram" as a medium, as you probably guessed I've always liked 3D stuff and popping virtual objects out of the screen was my next personal challenge. But that itself wasn't enough for a project, what was missing was Danielle's ideas of using it as a device for showing clothes for sale (especially those worn by actors and actresses from soap operas) and her experience in creating stunning presentations, Giovanni's ideas of using this kind of visualisation for soccer/association football matches and his experience with 3D scanning with Kinect, and Guilherme's experience as an intern at Google to quickly create, assemble and deploy functional Web Services and Databases. I was lucky enough to partner with these amazing guys, one of which I already knew, and like that we had the perfect team to compete! 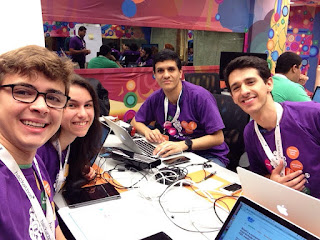 (from left to right) Guilherme Berger, Danielle Cohen, Giovanni Marques and I.

With that team and a some hours of work, we were able to develop a platform called HoloGlobo! This platform allows a person to quickly scan an object or person and then upload its 3D model to a Database, thus publishing it. Right after that, this model becomes available online and people are able to visualise it as an "hologram" or in a 3D scene using our dedicated apps.

A platform like this has a lot of applications, but I believe that the main ones are related to commerce (especially e-commerce), allowing people to have a better look at some products before purchase. Other applications include the diffusion of special television content, such as shows or sports matches, in this "hologram" format. Hopefully more people will be eager to watch television if they are able to have this kind of proximity and interaction with the content being broadcasted. 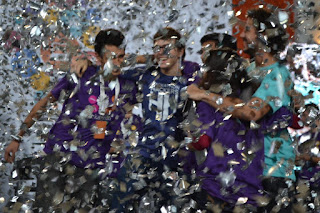 Our prize is no less than a three day visit to the MIT Media Lab! Should I tell you how excited I am to go there? It's going to be AWESOME!!! Besides, it will be my first time visiting the US!